Everything About Fiction You Never Wanted to Know.
(Redirected from Tim and Eric Awesome Show, Great Job!)
Jump to navigation Jump to search 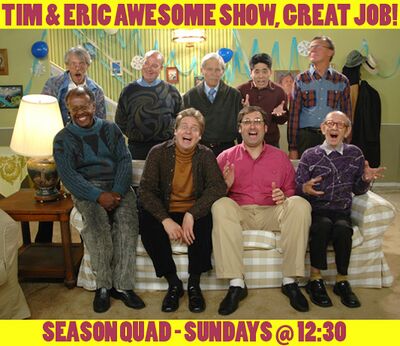 A 15-minute long Adult Swim original centered around comedians and video artists Tim Heidecker and Eric Wareheim, the creators of the absurdist cartoon Tom Goes to the Mayor. Known for often skirting the border between comedy and gratuitous absurdity (or worse), and also for recruiting extremely obscure, untalented, and non-telegenic performers as recurring cast members, such as James Quall, David Liebe Hart, and the late Richard Dunn, and sticking them alongside frequent cameos from well-known comedy actors. All of this comes together as what low-budget local public-access television from The Eighties and Nineties would look like if it was made by stoners.

As of 2010, the show's run has ended, replaced by the Spin-Off, Check It Out With Dr. Steve Brule.

Tropes used in Tim & Eric Awesome Show, Great Job! include:
Retrieved from "https://allthetropes.org/w/index.php?title=Tim_%26_Eric_Awesome_Show,_Great_Job!&oldid=1559474"
Categories:
Cookies help us deliver our services. By using our services, you agree to our use of cookies.