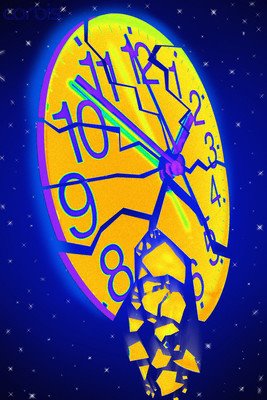 
Now take that tree you've just drawn. Put it on a desk. And empty your inkwell onto it. That's what happens when a time machine blows up.
—Tycho Green, Shrapnel

For the Doctor Who mini-episode which could have ended in this trope, see Doctor Who/Recap/2007 Ci NS Time Crash.

It's already been well-established that time is like a big ball of wibbly-wobbly, timey-wimey stuff. Cause does not lead directly to effect; you can shoot your own grandfather and in all likelihood get away with it, take an active hand in the events that made you who you are, and generally abuse time until it cries uncle.

But what about universes where time is not quite so wibbly-wobbly or timey-wimey? What about those realities where time is a rigid, orderly, and above all fragile structure, and some well-meaning fool sets off with a time machine to change history?

Then in all likelihood, you'll have a Time Crash on your hands.

When you've gone and broken time, all bets are off. More benign Time Crashes may take the form of a Groundhog Day Loop waiting for someone to find the magic key which breaks the cycle. In others, cause and effect itself may be shattered, resulting in a Fate Worse Than Death for all affected.

Garden-variety temporal wedgies need not apply in this trope. This is not about your usual temporal inconveniences, the kind that make your best friend vanish from the time line, put Adolf Hitler in the Oval Office or make medieval Japanese the lingua franca of the 21st century—that is, the sort that can be solved by a simple trip back in time to Set Right What Once Went Wrong. A good and proper Time Crash should have some large-scale, reality-breaking effects: holes get punched in the fabric of space-time, the Clock Roaches show up and start eating people, things that should happen one after another happen the other way around instead, or worse, simultaneously, etc.

A Time Crash is not a simple thing to solve, either: usually, it involves either some serious Applied Phlebotinum or enough firepower aimed at the right Eldritch Abomination...if it can be fixed at all.

A form of Divide by Zero. Compare Ret-Gone.

Examples of Time Crash include:

Alright, this next test may involve trace amounts of Time Travel. So, word of advice: if you meet yourself on the testing track, don't make eye contact. Lab boys tell me that'll wipe out time. Entirely. Forward and backward. So do both of yourselves a favor and just let that handsome devil go about his business.