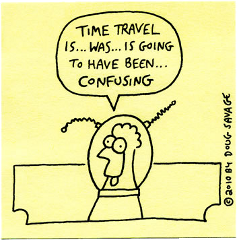 Most Indo-European languages have multiple tenses, to differentiate things that have happened from things that will happen, plus some to define what had happened before that, not to mention some that are a bit less identifiable in their everyday uses (I'm looking at you, Pluperfect Subjunctive). It mostly works fine when your timeline is a strict progression from cause to effect.

Unfortunately, when you are watching the San Dimas Time, winding through the threads of the Timey-Wimey Ball, chasing another time traveler who is always one step ahead of you, it can become awkward. As a result, time travelers will often stumble over their wording, leading to use of tenses that can be torturous to understand.

Usually this is an experienced traveler explaining in eloquent yet incomprehensible terms that they didn't "just succeed", when you return from an adventure in the future. Alternatively, a less experienced character will attempt to explain what's going on, and struggle with their terms.

If your Future Me shows up, there may be pronoun trouble on a similar style, especially if there's several versions of future characters knocking around.

This is related to Meanwhile in the Future, Anachronic Order.

Retrieved from "https://allthetropes.org/w/index.php?title=Time_Travel_Tense_Trouble&oldid=1879747"
Categories:
Cookies help us deliver our services. By using our services, you agree to our use of cookies.