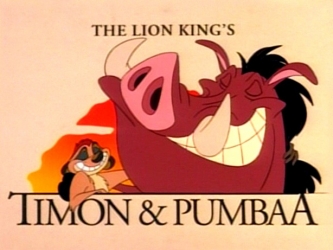 Timon and Pumbaa is a cartoon starring Timon the meerkat and Pumbaa the warthog from the Disney franchise The Lion King. The show first aired on CBS from 1995 to 1998. it has been rerunning on various Disney channels ever since.

It largely ignores the canon of The Lion King, focusing on characters alone. And instead of the realistic style of the movies, it goes for Surreal Humor. It didn't even stay in Africa. But, for what it is, it isn't bad.

The song "Hakuna Matata" was the musical theme of the series, and the philosophy of Hakuna Matata ("no worries") was the narrative theme.

Tropes used in Timon and Pumbaa include:

"It is hereby illegal to tell me to 'chill out!'"