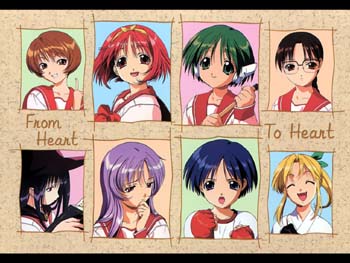 To Heart is a Japanese adult visual novel developed by Leaf and released for the PC in 1997. It was later ported to the PlayStation and given voice acting. A second PC version, To Heart PSE was released to the PC and PlayStation with the adult scenes removed.

It was followed by a sequel, To Heart 2, and two anime series.

The gameplay in To Heart requires little player interaction, following predetermined scenarios with courses of interaction, focusing on the appeal of the eight female main characters. Every so often the player will come to a "decision point", and the story progresses according to the player's decisions. There are eight main plotlines, one for each of the main heroines. In order to see all the possible storylines, the player must replay the game multiple times, making different selections at the decision points.

Tropes used in To Heart include:
Retrieved from "https://allthetropes.org/w/index.php?title=To_Heart&oldid=1715862"
Categories:
Cookies help us deliver our services. By using our services, you agree to our use of cookies.