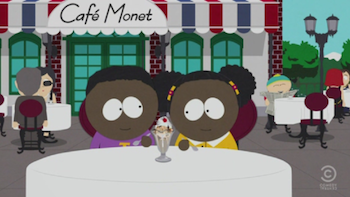 When the writers want to give the token minority a love life, but are in a bind because either A) most of his options are already taken, or B) the writers (or producers) would rather avoid the controversy of interracial romance. Thankfully, the latter isn't much of an issue anymore, but there remains some instances of "like goes with like" in fiction. This comes in 2 varieties:

Type A: The writers attempt to remove the label of tokenism by adding a similar character later, like a black female after a black male. Would be hypothetically successful, except she is usually a Distaff Counterpart who is quite clearly going to be paired off with the token at some point and will not be fully integrated into the established 'team'.

Type B: Two minority characters are established independently of each other. If they have any interactions at all, it's as friends and nothing more. But then later seasons find them getting...friendlier, even though they have nothing in common beyond their race. It is Not a Subversion if the lovebirds are different minority races. If everyone else on the show is white except for a black and an Asian, and they fall in love with no subtlety or natural buildup, it's as straight an example as any other. This is because only two races matter in Hollywood: white and not white.

Homo/bisexuality is the most common non-racial variant. This can be tricky, since a same-gender love interest must by necessity be sexually compatible, so the key thing to look for is if their relationship develops at a realistic pace and the character is subtly introduced, or if Billy Queer just pops up and is clearly going to get in the token gay's pants. But if the show features two gay/bi characters with no real connection to each other and no reason to start dating, it's another straight example if they get in bed.

Another variant happens in the World of Funny Animals, where everybody is a different anthropomorphic animal, but no matter how anthropomorphic they are, only those of the same exact species will truly hook up. For example, Bob Kitty is the only cat in the show and has no love interests until Alice the cat shows up. This is less Fantastic Racism and more to avoid the potential Squick of an Interspecies Romance.

It is unnecessary to list aversions, since that tends to mean rattling off the character's entire dating history.

Examples of Token Minority Couple include: