Everything About Fiction You Never Wanted to Know.
Jump to navigation Jump to search
/wiki/Toonamicreator 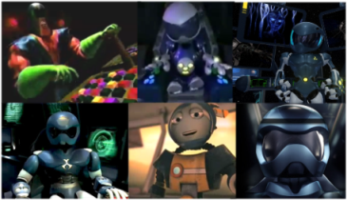 The many hosts of Toonami, in charge of building you a better cartoon show. [1]

Toonami, an influential programming block consisting primarily of a mix of Western action-adventure cartoons and anime, aired on weekday afternoons (and, later, Saturdays) on Cartoon Network starting in 1997. The block featured incredibly high production values for its commercial bumpers, advertisements, and ARG campaigns, which included high-end 3D graphics, a soundtrack consisting of then-uncharacteristic (for a children's block) drum-and-bass and ambient music, and a consistent setting and narrative. Toonami had a hand in uncancelling several syndicated series (Dragon Ball Z, ReBoot, and Sailor Moon), and it premiered several series on its own, both anime (Gundam Wing, Outlaw Star, all three of the original Tenchi Muyo series) and Western animation (the 2002 He-Man and the Masters of the Universe). In regards to anime, fans and historians both credit Toonami for single-handedly ushering in the mainstream Japanophilia boom of the early-to-mid 2000s.

Toonami began life as a spinoff of Space Ghost Coast to Coast, with Moltar broadcasting action cartoons from the Ghost Planet. Cartoon Network later Retooled the block with an original host character, TOM (standing for Toonami Operations Module), broadcasting from the Cool Starship Absolution (with Spaceship Girl SARA joining the cast later). The network also created story-based events and online games associated with TOM and the Absolution (the first of those events, The Intruder, resulted in the upgrade of TOM to TOM II). The tenth anniversary of the block brought yet another Retool, relocating the Framing Device to a jungle planet with a new incarnation of TOM and several other new Robot Buddies; fans widely think of this version's cast as Replacement Scrappies.

Cartoon Network exported Toonami to other nations' versions of the network; it even became an entire network thanks to a revamp of the spinoff channel CNX (before degrading into "CN Too"). The Kids WB weekday afternoon block also tried to adopt Toonami's brand for about a year from 2001-2002, but the programming didn't fit the block's image, and the Toonami branding soon went away.

Fans of Toonami recognize the block -- or, more accurately, Toonami's "Midnight Run" -- as the Spiritual Ancestor of Adult Swim. Several anime series that aired on Toonami ended up airing on [as] during the latter block's first year.

Cartoon Network eventually cancelled Toonami due to flagging ratings (a direct result of moving the block to Saturdays only and filling it with reruns), then-flagship show Naruto working through the now-infamous pre-Shippuuden Filler Arc, and the higher-ups' need to retool the network itself. The final edition of Toonami aired on 20 September 2008 (surprising fans who had no knowledge the network had cancelled Toonami), and the "Toonami Jetstream" streaming video site subsequently went offline in January 2009.

On April Fools' Day 2012, Adult Swim "revived" Toonami for one night; while it mainly reused clips from the past -- and showed episodes of classic Toonami shows -- it also featured new lines recorded for a special Bleach bumper and an all-new review of Mass Effect 3.[3] Needless to say, fans pretty much ate it up like candy. A massive frenzy surged through the internet as fans tweeted, posted, and rallied together to support the idea of bringing Toonami back, with Steve Blum (the voice of TOM) leading the charge. At its 2012 upfront on May 16, [as] officially announced the return of Toonami after the resounding success of the April Fools special; the block would rise again on May 26, and it would receive a mix of old and new programming.

Currently, the new is set to run on a shoestring budget until ratings go up, but with new animated segments featuring a slightly revamped TOM 3 and airing several [as] anime favorites as well as two new shows. There are also currently talks to pick up licenses to several other shows.

The original Toonami featured the following programs, among others:

The [adult swim] version of Toonami has featured the following programs

Shows shown starting on the May 26th Revival

The Toonami framing sequences were basically their own universe -- and as such, had their own tropes:
Retrieved from "https://allthetropes.org/w/index.php?title=Toonami&oldid=1772584"
Categories:
Cookies help us deliver our services. By using our services, you agree to our use of cookies.