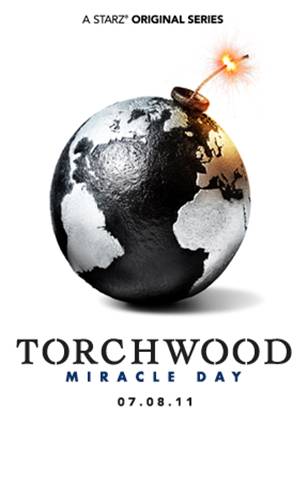 Torchwood: Miracle Day is the fourth series of Torchwood, which began airing on Starz on July 8, 2011. It's a ten-part miniseries, similar to Children of Earth in tone. The storyline is a BBC America / Starz co-production that's set in both Britain and America. Covering the equivalent screen time of 20 episodes of the original Doctor Who series, this makes it the longest single storyline in the history of the franchise. [1]

Miracle Day takes place some time after the traumatic events of Children of Earth. People on Earth have very suddenly stopped dying, mystifying experts and straining the Earth's resources. This is Played for Drama, as every single realistic result of unending death is explored: people trapped in explosions remain conscious and in horrifying agony forever, both normal hospital procedures and the entire legal system need to be revised within days, the normal 50% in-utero mortality rate of severely disfigured fetuses is no longer in effect, and the undeath is soon found to be Age Without Youth.

Captain Jack Harkness (John Barrowman) and Gwen Cooper (Eve Myles), the last members of the Torchwood team, reunite. They're forced to go to America, where they are helped by CIA secret agents Rex Matheson (Mekhi Phifer) and Esther Drummond (Alexa Havins), as well as others sympathetic to their cause. Things quickly get complicated when Jack realizes that he's been stripped of his own immortality and healing powers in the process.

The series is Darker and Edgier, Bloodier and Gorier and Hotter and Sexier than Torchwood had ever been before. Although it still retains its Camp elements, Miracle Day is largely serious, with a strong focus on Medical Horror and Body Horror.

In a bit of a role reversal from previous airing schedules of both Doctor Who and Torchwood, The American channel Starz aired the episodes first and then aired in Britain a week later (with Canada and Australia airing them in-between).

Tropes used in Torchwood: Miracle Day include:
Retrieved from "https://allthetropes.org/w/index.php?title=Torchwood:_Miracle_Day&oldid=1869055"
Categories:
Cookies help us deliver our services. By using our services, you agree to our use of cookies.