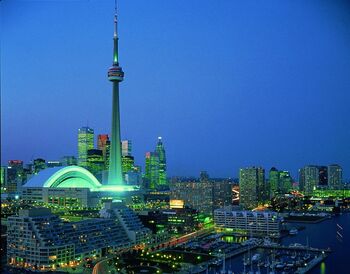 Toronto is the largest city in Canada by population (2.7 million people lived in the city itself and 5.9 people lived in the metropolitan area as of the 2016 census) and the capital of the province of Ontario. It is not, however, the federal capital - that's Ottawa (which is also in Ontario). Non-Canadians don't always remember this.

In addition to its many charms, the Greater Toronto Area (nobody who lives there thinks of games first when they hear "GTA") is also one of the great stand-in cities of movie and television fame as filming in Canada is quite a bit cheaper than in the US.[2] The City with No Name is often Toronto. Several times, they've forgotten to remove Toronto landmarks in the movies, leaving Canadians watching what's obviously Toronto when it's supposed to be set in the United States. In Canada, it's often (derisively) nicknamed "the centre of the universe", partially because it's the first city anyone outside of Canada will think of. Oh, and everybody in Canada who lives outside of the Greater Toronto Area hates Toronto - and sometimes the people who live inside it. This is largely because of a perception, true or false, that Torontonians are oblivious to the country outside of their city.[3]

One can easily detect outsiders in Toronto by hearing them pronounce it "Tow-Rawn-Tow". City natives, or those from closely neighbouring regions who talk with city natives constantly, typically drop the last T, and sometimes the first O, so it's "Toronno", "T'ronno", or even "Ch'ronno" (with the first consonant being the "ch" in "chair").[4] Nicknames include T.O. (an acronym of Toronto, Ontario), the T-dot (a shortening of the former), Hogtown or The Big Smoke (names arising from historic industries associated at different times with the town), and "Toronto the Good". Peter Ustinov famously described it as "New York run by the Swiss", though the appellation isn't quite as accurate as it once was.

Toronto is actually a "mega-city"; in 1998 the downtown core of Old Toronto and its neighbouring municipalities, all of which were their own cities at the time, were amalgamated into one single City of Toronto. This has generally been regarded as a serious dick move by the offending Tory provincial government, and led to all kinds of confusion and annoyance. For convenience's sake, the post office still treats residents of the City of Toronto as residing in the no-longer-extant former cities they would have been inhabitants of before amalgamation, and claiming you live in Etobicoke on government documents is perfectly licit, meaning exactly the same thing as claiming you live in the City of Toronto.[5] This explains why one still finds, for instance, "North York Hydro" written on manhole covers in streets north of the core.

Not all of Toronto's suburbs are part of the mega-city; cities like Vaughan, Richmond Hill, Mississauga and Brampton are sizable cities in their own right. The whole giant monster is known as the Greater Toronto Area (GTA for short). In general the core is known as the 416 area and the surrounding GTA as the 905 (these being the dominant phone area codes in the two segments). The term "Golden Horseshoe" is also used for a larger area surrounding Toronto, containing the GTA and nearby towns and cities wrapped around the north-western shore of Lake Ontario. Particularly expansive definitions of the Golden Horseshoe include most of Southern Ontario as well as Buffalo, New York. The question about which cities or suburbs are part of Toronto or not has led to some confusion and general mockery among Canadians. The consensus has become the farther away one is from Toronto, the larger the city becomes. For example, while in southern Ontario, a citizen of Mississauga is not from Toronto and will be insulted if you declare them as such. However that same Mississaugan will claim to be from Toronto while traveling overseas (or more than two provinces away) just to keep things simpler. And, as mentioned, if you happen to live in the amalgamated megacity, some of your neighbours may well be willing to fight you to the death over whether you're both residents of Toronto or not.

In The Seventies, just as the rest of the Great Lakes region was beginning its long, slow decline, the city received a huge boost from the provincial government - of Quebec, whose newly-passed language laws and talk of separatism led to a flood of formerly Montreal-based Anglophones and businesses leaving for Toronto, including most of the Canadian banking industry.

Toronto is an exceptionally multicultural city: 47% of its population consists of "visible minorities"; soon, "white" will be a "visible minority" by census, and already is within North York, the largest, second most populous, and most multicultural zone in the megacity. Furthermore, Toronto's multiculturalism is exceptionally non-nominal, as the city has the highest proportion of recent immigrants of any of the world's major cities; Toronto is thus thought of as quite immigrant friendly and harbours many distinct cultural communities from diverse regions of the globe.[6] As such, the city is known for all sorts of cultural festivals such as Caribana, A Taste of the Danforth (Greek food) and the world's largest Gay Pride Parade, which is the last of three such parades, including the Trans March and Dyke March, which close off a week long celebration known as Pride Week annually. The city will be host to the World Pride festival in 2014. It even has its own film festival, TIFF (the Toronto International Film Festival), an event that is definitely in the top five Film Festivals in the world with some people thinking it's second only to Cannes.

The popular saying is that Toronto has only two seasons: winter and construction. It's not always completely true,[7] but spring and fall do seem to be pretty short, and sometimes snowstorms are separated from sweltering, smog-filled furnaces by as little as a month. (And yes, there are very hot days during the summer; it's not all Inuit and igloos. Come to Toronto in July and August dressed in long sleeves and you will most likely suffer from heat stroke.) As for the construction, because of all the snowfall Toronto has to concentrate all its road work in the summer months, add the fact that Toronto's highways are some of the busiest in the world (the main crosstown route, Highway 401, is by most measures the busiest highway in the world), so that when construction starts forcing lane closures, things get gnarled very quickly. Luckily there are fewer people in the city during the summer, as many go off to "cottage country" or elsewhere for vacations.

The snow thing is a bit of a sore point. Back in 1999, a particularly huge (by Toronto's standards) snowfall had Mayor Mel Lastman so worried, he called in the army to help to clear it away. This became a goldmine of mirth for other places in Canada like Montreal and Ottawa, which get an average of almost twice as much snow as Toronto does and get ice storms as well.[8]

Wikipedia has a larger list of people from Toronto.

Retrieved from "https://allthetropes.org/w/index.php?title=Toronto&oldid=1940172"
Categories:
Cookies help us deliver our services. By using our services, you agree to our use of cookies.