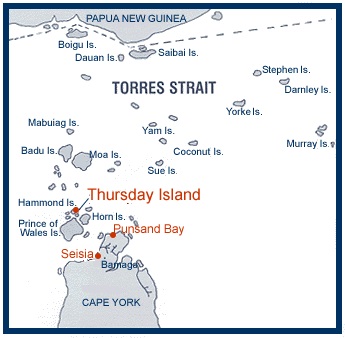 There are two main indigenous ethnicities of Australia - Australian Aborigines, and Torres Strait Islanders. Sadly, the latter are relatively unknown outside of Australia, and often forgotten even in the nation itself.

Before the British settled Australia, the Torres Strait Islanders were seafaring and trading peoples, and traded amongst themselves, as well as with Aborigines and Papuans. Unlike Australian Aborigines, Torres Strait Islanders are Melanesians, meaning they are from the same broader ethnic group as the ni-Vanuatu, Solomon Islanders, and Papua New Guineans, . In fact, when Papua New Guinea gained its independence from Australian governance in 1975, there was serious debate about whether the Torres Strait, the Islanders' traditional home, should be lumped in with the new PNG nation, or stay part of Australia. In the end, all of it did (bar a few miniscule islands hugging PNG's coast).

The Torres Strait is part of the State of Queensland (seen on the map as Cape York, the tip of the Australian continent). There are about 20 thousand Torres Strait Islanders, and despite this small number, they have multiple languages, including an English-influenced creole. Most actually live on mainland Queensland. A celebration of their culture stakes place in that state's capital, Brisbane, every year.

Thursday Island is the Torres Strait's administrative centre. There's a very small Friday Island too, but sadly the other days of the week go unrepresented.