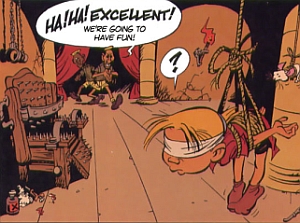 A chamber of horrors exists where unspeakable things are done to people, which typically leads to their doom. It might seem like an inescapable madhouse or some unearthly realm of torment, but the truth is...it's just someone's cellar. Used in suspense and horror works, especially works that revolve around serial killers who enjoy torturing their intended victims.

Over-the-top decorations in blood and bones somehow do not result in insect infestation or a telltale stench alerting anyone to the evil doings of the house's owner. This may be due to visual media being bereft of a sense of smell, so it never occurs to them.

You would think that the above, plus issues such as problematic cleanup; soundproofing to prevent screams from being heard; deadly bacteria flourishing; and just plain incompetence on the part of the villain would make this the last straw as far as Willing Suspension of Disbelief is concerned; but the Rule of Scary tends to make this Fridge Logic. Sadly, real neighbors actually do "mind their own business round here" to the extent that truly unbelievable things happen in real cities and suburbs. The case of the torture-murder of Sylvia Likens from 1965 is a good example of this.

Worse, real serial killers get away with bizarre and murderous activities for years before being caught.

If the writers attempt to justify it, the villain will monologue about how people are stupid cows who do not pay any attention to anything besides reality TV. As seen above, this is entirely true.

A subtrope of Creepy Basement. Also related to Locked in the Dungeon, for a more medieval setting. Often the first nasty room found when Exploring the Evil Lair.

Examples of Torture Cellar include:

Retrieved from "https://allthetropes.org/w/index.php?title=Torture_Cellar&oldid=1931474"
Categories:
Cookies help us deliver our services. By using our services, you agree to our use of cookies.