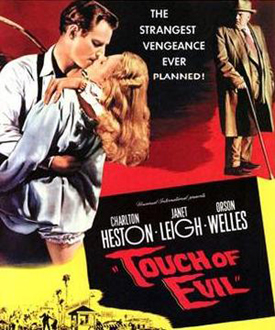 Touch of Evil (1958) is one of the last and one of the greatest examples of Film Noir, written by, directed by and co-starring Orson Welles.

The film begins with an exploding car killing a powerful businessman, witnessed by Vargas and his new wife Susie on the Mexican border. Claiming joint jurisdiction (as the bombing may have been placed in Mexico), he works his way into the investigation headed by Quinlan. Quinlan quickly sets his beady eyes on a lowly Mexican employee that had a grudge with that businessman (the employee wanted to marry the businessman's white daughter). When Vargas notices that some of the evidence found by Quinlan's loyal partner Menzies was clearly planted (but can't prove it), Vargas starts questioning Quinlan's case history. But while this is all happening, Susie Vargas is left all alone at a creepy hotel where some gang members that Vargas is after is holed up as well... and Quinlan starts making a few calls to the gang's boss about what to do with that lonely newlywed...

The story goes that producer Alan Zugsmith offered Welles a pile of scripts to direct and Welles asked for the worst one (based on pulp novel Badge of Evil) to prove that he could make a great film of a bad script. Such a thing isn't really possible, but Welles did revise the script into something much better, and filmed that. Unfortunately, the theatrical cut didn't resemble Welles' vision.

Tropes used in Touch of Evil include:
Retrieved from "https://allthetropes.org/w/index.php?title=Touch_of_Evil&oldid=1834045"
Categories:
Cookies help us deliver our services. By using our services, you agree to our use of cookies.