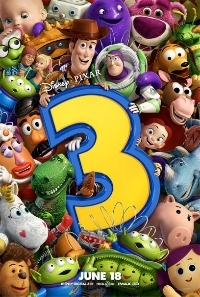 The third movie of the Toy Story franchise.

A plot summary, courtesy of Wikipedia:

17-year-old Andy is about to leave for college, and his toys have not been played with for years. He intends to take only Woody with him, and puts Buzz Lightyear, Jessie and the other toys in a bag to be stored in the attic. Andy's mother mistakenly takes the bag to the curb for garbage pickup. The toys escape and, believing Andy intended to throw them away, decide to climb into a donation box with Barbie bound for Sunnyside Daycare. Woody follows them but is unable to convince them of the mistake.

Andy's toys are welcomed by the other toys at Sunnyside, and are given a tour of the seemingly idyllic play-setting by Lots-O'-Huggin' Bear ("Lotso"), Big Baby, and Ken, with whom Barbie falls in love. All of the toys choose to stay, except Woody, who attempts to return to Andy, but is instead found by Bonnie, one of the Sunnyside students. She takes Woody home and plays with him along with her other toys, which are well-treated. Meanwhile, at Sunnyside, a group of toddlers play roughly with Andy's toys.

Buzz seeks out Lotso to request to have them moved to the older children's room, but Lotso, who controls Sunnyside in a concentration-camp-like style, refuses, explaining that the newer toys need to be sacrificed to the younger children to protect the older ones, indifferent to damage or suffering they might endure. Seeing promise in Buzz, Lotso resets Buzz to his original space ranger persona, which also resets his memory. At the same time, Mrs. Potato Head, through an eye she accidentally left in Andy's room, sees Andy searching for the toys and realizes Woody was telling the truth. However, before they can leave, Andy's toys are imprisoned by Lotso's gang, guarded by Buzz...

Tropes common to the franchise are listed on the Toy Story franchise page. Tropes specific to this movie include:
Retrieved from "https://allthetropes.org/w/index.php?title=Toy_Story_3&oldid=1921159"
Categories:
Cookies help us deliver our services. By using our services, you agree to our use of cookies.