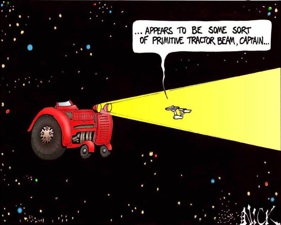 Classic Applied Phlebotinum found on many, many space ships in fiction. At the press of a button, a beam of light comes out of the ship and sucks in anything in its reach. Occasionally used to move things already on the ship, too. The Tractor Beam thus allows space travellers to capture enemy ships, travel to the surface of planets, and steal the farmer's cows.

Many stories with Alien Abductions use this as the means of abduction—a small tractor beam just big enough to pull one human. Of course, that kind tends to run in reverse as well.

Not to be confused with Weapons That Suck.

Examples of Tractor Beam include:

Retrieved from "https://allthetropes.org/w/index.php?title=Tractor_Beam&oldid=1516957"
Categories:
Cookies help us deliver our services. By using our services, you agree to our use of cookies.