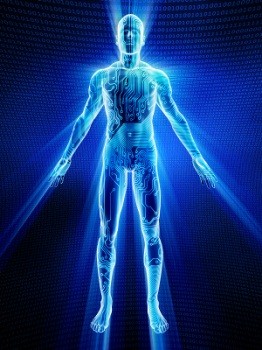 Simply put, a Transhuman (sometimes called a Posthuman) is a person who has exceeded their normal mental and/or physical abilities/limitations. The how can be anything from magic to science, the only thing that's common among all of them is that they are somehow better than before.

And even though this trope is called Transhuman, it's not actually limited to humans. Other species or beings that are enhanced count as well.

Has nothing to do with Transgender; the shared root Trans[1] is the only commonality, and even then both terms use different definitions of it. The root trans- here means "above and beyond".

This is a quite common trope, and supertrope to the Transhuman Tropes. Particularly, it's related to all of the following:

See the The Singularity for the usual cause of "real" transhumans. For some of the abilities a Transhuman might have, see Stock Super Powers. See also No Transhumanism Allowed.

Not to be confused with the comic book of the same name by Jonathan Hickman.

Examples of Transhuman include:

Retrieved from "https://allthetropes.org/w/index.php?title=Transhuman&oldid=1923428"
Categories:
Cookies help us deliver our services. By using our services, you agree to our use of cookies.