Everything About Fiction You Never Wanted to Know.
(Redirected from Transporters and Teleporters)
Jump to navigation Jump to search 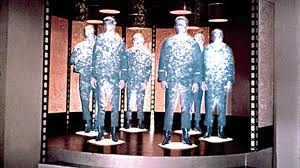 Phlebotinum constructs that "beam" characters from the Cool Starship to Kirk's Rock and back again. Could also be done on-demand if the character has a device to "summon" one, or if the story puts them Inside a Computer System and they can just select the place within the system to teleport to.

Characters stand in teleporter, special effect happens, they disappear. Cut to planet surface, where they reappear by reversed special effect.

Considerably cheaper than a shuttlecraft, from a special effects point of view. Star Trek only has them because the cost of landing craft effects proved to be too much for the budget of the original series. However, years later, Gene Roddenberry admitted they could have just handled things with a jump-cut between "Launch a shuttle!" and "Here we are on the surface.", as evidenced in Gene Roddenberry's Andromeda, where they don't generally have transporters, but do have very fast, rarely seen shuttles.

With very few exceptions (The Tomorrow People, Stargate SG-1), such devices are capable only of comparatively short-range transport. You still need a Cool Starship to get between stars.

This technology has the potential to short-circuit the drama of a story, so all examples have limitations built in to cause the transporter/teleporter/ disintegrator/whateverator to fail whenever it is needed most. (See: Plot-Sensitive Items, Phlebotinum Breakdown, and Teleporter Accident.)

The ability to accomplish the same thing without technological means also crops up from time to time, either by "magic", or as a kind of superpower. Non-technological teleportation accomplished by psychic power is often called "Jaunting", after Alfred Bester's science fiction classic, The Stars My Destination.

The Star Trek-style turn-you-into-energy-and-back-again transporter is perhaps the single most physically impossible piece of Phlebotinum in all of Science Fiction, for a large number of different reasons, including enormous temperature and data storage requirements, computational time (many times the age of the universe), massive energy output (more energy than is available in the entire universe), and unachievable transmission focusing resolution (all explained by physicist Lawrence Krauss in The Physics of Star Trek). This puts it among the crown jewels of Weird Science.

It also raises some hairy metaphysical questions as well, regarding just what happens to you when you step into the thing, and who exactly emerges at the other end. This issue was explored rather bleakly in the James Patrick Kelly story "Think Like a Dinosaur" (later adapted into a 1990s Outer Limits episode). And that's if the process works. See also the Twinmaker teleporter, a teleporter that analyzes the contents of one booth, sends a description to the other, creates a clone there and destroys the original.

Due to the above, teleportation in modern works often works by warping space somehow, or passing through Another Dimension.

Used offensively to kill or incapacitate, it's Weaponized Teleportation.

Examples of Teleporters and Transporters include:

Retrieved from "https://allthetropes.org/w/index.php?title=Teleporters_and_Transporters&oldid=1943357"
Categories:
Cookies help us deliver our services. By using our services, you agree to our use of cookies.