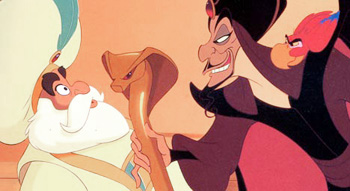 Also called a Mentor Mole, a Treacherous Advisor character is the type the Heroes consult when they're digging up an Ancient Conspiracy, or something of the sort, and have hit a dead end. Surely he's in a position to be helpful? After all, he's the scholar/politician/military man/whatever, and just likely to have the information they need. Not to mention he can keep a secret.

Unfortunately, this trusted expert is secretly one of the bad guys. Sometimes he may actually be the Big Bad. What makes him different from your average Mole is the degree to which the heroes require his assistance—he's not a regular part of their team, but he's the only person who can give exactly the help needed.

The dead giveaway for this character type is accepting the heroes theories with a complete lack of skepticism. If it were anyone else, the first thing out of their mouth would be, "Why should I believe you?" If the character says "Have you told anyone else?" or "It's a good thing you came to me." be warned: they're either about to give The Reveal or planning on making some calls and starting a massive cover-up as soon as the hero leaves the room.

Another common trait of Treacherous Advisors is storing the Plot Coupons the heroes are fetching, revealing themselves once they have the last one. In these cases, a common giveaway is their seeming a little too interested in the Plot Coupons, more specifically in the act of actually taking them. A dead giveaway is if he doesn't let the hero look at the ones he's already collected. The hero will sometimes catch on as he's returning the last one, but never before then.

In a Tournament Arc, the Treacherous Advisor may be the one who helps the hero reach the finals because he (or his Big Bad boss) has a trap waiting in the final round.

This is generally a subversion of the more typical Mentors or Reasonable Authority Figure, whom the character seems to be until The Reveal.

On rare occasions, everyone of importance whose help the hero seeks is a mole; the hero's only real allies are the ones with no power or influence.

Not to be confused with the Evil Chancellor. Contrast Sarcastic Devotee. Despite its name, the Evil Mentor and this trope rarely overlap as the Evil Mentor will not try to hide its true nature.

WARNING: Examples can be major spoilers for a climactic reveal. Read ahead at your own risk.

Examples of Treacherous Advisor include:

Retrieved from "https://allthetropes.org/w/index.php?title=Treacherous_Advisor&oldid=1870390"
Categories:
Cookies help us deliver our services. By using our services, you agree to our use of cookies.