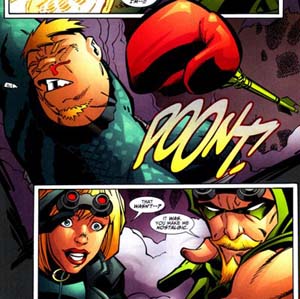 It seems that there is no end to the inventiveness of bowmen, especially in Superhero comics. If a character uses a bow as their main weapon, you can expect that their quiver will hold, at the very least explosive arrows, arrows which split into nets for capturing opponents, and knockout gas arrows. Furthermore, they will undoubtedly be masters of trick shots, hitting targets around corners or rebounding from behind.

While some other types of weapons get similar treatment (boomerangs and yoyos especially), the Trick Arrow is a trope in its own right that seems to appear anywhere there are bows and arrows. Doubly so if the characters are honor-bound not to kill, since there's very little bows are normally designed to do except shove sharp projectiles into bodies.

The trick arrows are almost inevitable with superheroic archer characters. They are useful and straightforward starting points for superheroic characters for a variety of reasons, not the least of which is that Robin Hood is a cultural icon in the English-speaking world. In addition, references for the poses and equipment are fairly easy to come by, as well as being readily identifiable by readers. And therein lies the problem: We Have Seen ALL Of This Before, at least with respect to plain vanilla archery. Hence, trick arrows to surprise the readers and to break up the tedium of writing/drawing ordinary pointy-arrow-work.

Characters who use boring old flaming arrows don't fall under this, unless the arrows are otherwise complex and/or unlikely. They may be pointless, but at least they're possible. A character who uses trick arrows is almost always capable of successfully pulling off a Multishot.

Examples of Trick Arrow include:

Retrieved from "https://allthetropes.org/w/index.php?title=Trick_Arrow&oldid=1651673"
Categories:
Cookies help us deliver our services. By using our services, you agree to our use of cookies.