Everything About Fiction You Never Wanted to Know.
Jump to navigation Jump to search
/wiki/Triple Hcreator 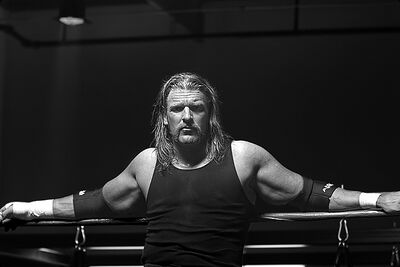 It's all about the Game and how you play it!

Triple H, or Hunter Hearst Helmsley if you prefer (not Paul Levesque), is one of WWE's longest tenured performers. He is a multi-time WWE Champion (winning it eight times), and has been part of some of the biggest angles and matches in the company's history. Currently, he is the on-screen Chief Operating Officer (in real life he works in the backstage area of the business, as Executive Vice President of Talent Development and Relations, as well as a "Senior Advisor" to Vince McMahon).

As usual, That Other Wiki has a nice, long article on his career.

Triple H provides examples of the following tropes:
Retrieved from "https://allthetropes.org/w/index.php?title=Triple_H&oldid=1927713"
Categories:
Cookies help us deliver our services. By using our services, you agree to our use of cookies.