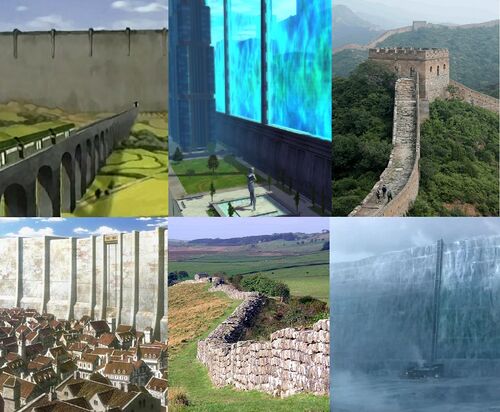 The natural impulse when it comes to defending one's lands from an invading force is to build a wall to keep them out. And when there is a great threat, then there is a Great Wall. These are barriers of truly monumental size, length or both -- they don't defend just a town or a city, but often an entire nation or continent. The most extreme examples not only stretch for miles, they also tower hundreds of feet above the lands they guard.

Naturally, as soon a such a wall appears in a story, the need or desire of someone to cross it becomes important to the overall plot. Or perhaps the fact that someone has already crossed it, or is crossing it far more easily than they're supposed to. Either way, the Wall is more than just a landmark -- it's a plot point. It's a destination, or an obstacle, or (counter-intuitively) a portal. When you have a Great Wall in a story, it becomes a motivation as well as a set piece.

The Trope Namer is, of course, The Great Wall of China.

Great Walls are rarely employed as part of a military defense in the modern era, as aircraft pretty much render walls of any size useless. That didn't stop East Germany from building the Berlin Wall in 1961, but then they weren't trying to keep the West out (mostly), they were trying to keep their people in. And the Gaza-Israel barrier is focused less on keeping out conventional military forces than it is on individual terrorists. However, as symbols, Great Walls excel even when they can be circumvented (as at least one American politician from the early 21st century was well aware).

This trope is only for literal, end-to-end-solid, physical walls -- figurative ones like the Maginot Line don't count.

Very much not an Invisible Wall. If the Great Wall is sufficiently huge and sufficiently effective (and what's on the other side is sufficiently unknown and/or scary), it may also be The Wall Around the World. Contrast Absurdly Ineffective Barricade (although a Great Wall can be one if constructed poorly or haphazardly, or if it has a Secret Path through or around it).

Examples of Great Wall include:

Retrieved from "https://allthetropes.org/w/index.php?title=Trope_Workshop:Great_Wall&oldid=1970302"
Categories:
Cookies help us deliver our services. By using our services, you agree to our use of cookies.