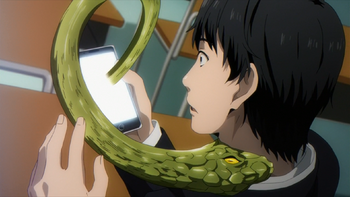 Just another mobile game preying on another innocent user.

A Metaphysical App is a smartphone app -- which is to say, a specialized computer program -- that has a paranormal or supernatural function. By their very nature they're found in Urban Fantasy or "soft" Speculative Fiction settings where the tech base is at least advanced enough to support hand-held computing devices capable of running reasonably complex programs. The magic is in the program, not the device it runs on.[1] There are settings where non-mobile computers or free-willed AIs can perform magic, but in neither case could one classify them as "apps".

Exactly how such a program accomplishes its function is open to authorial handwaving. They may be genuine Post-Modern Magik, where technological means are being used to produce a magical effect. On the other hand, it may just be Clarke's Third Law in play, with an ultimately mundane reason for what just looks like magic, however advanced it might be. Regardless, be careful that a Technopath doesn't get their hands on a phone that contains one of these.

Like many such tropes, the existence of Metaphysical Apps can be either a major plot element of the story in which they appear, or simple "flavor" details, like any other everyday technology.

Examples of Metaphysical App include:

Retrieved from "https://allthetropes.org/w/index.php?title=Trope_Workshop:Metaphysical_App&oldid=1903705"
Categories:
Cookies help us deliver our services. By using our services, you agree to our use of cookies.