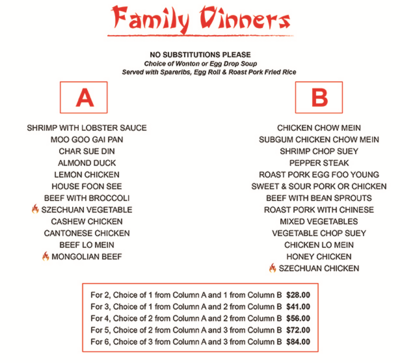 Dinner and a trope for three, please.

A Stock Phrase dating from the middle 20th Century. It is used to suggest either a combination of two or more elements or explanations, or to describe a situation where there are a large but limited number of options available in strictly controlled combinations.

The phrase comes from menus from mid-20th century Chinese restaurants, where full-course dinners being ordered prix fixe "family style" (or as individual combination entrees) would be presented in the form of two or more columns of items, with instructions to pick, for example, "One from Column A and Two from Column B"

This usage was popularized by comedian Buddy Hackett, whose "Chinese Waiter" stand-up routine was a famous and expected part of his act from 1952 through the early 1970s, and the earliest occurrences of the phrase (in the mid to late 1950s) explicitly referenced Hackett's act. By 1958, though, the phrase had entered the meme pool, and it was no longer necessary to footnote Hackett.

Ultimately, it became so familiar that presenting choices from "Column A" and "Column B" in any context (business, mathematics, etc.) came to be called a "Chinese menu" system. Although that usage seems to have started to fade since the beginning of the 21st century, the more generalized sense remains and can be frequently found online and in print, indicating that it's nowhere near Discredited Trope territory.

Unfortunately the animators apparently had never heard the phrase, so they animated actual Doric columns instead of a menu.