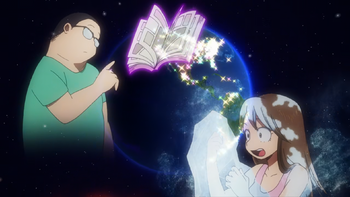 Superpowers within a setting which all derive from a shared trait or discipline.

There are many ways for a person to gain super-powers, be it heredity, a Mass Super-Empowering Event, a divine gift, or sometimes pure random chance. Whatever the explanation, there's more than one of you. Despite the outward appearances of your abilities, you share a form of kinship with your fellow empowered, be it a common weakness, power source, or genetic bloodline. The powers follow at least one of these criteria:

Sure signs you're dealing with this kind of power-driven link are as follows:

Exclusivity in powers are usually a result of Superpower Lottery being very random at least in detail. However, it may also happen due to a person giving their power away to someone else. A milder case of exclusivity is powers naturally restricted to specific bloodlines, though even those may at least express differently, including occasional duds. See also Personality Powers.

Examples of Power Systems include:

Retrieved from "https://allthetropes.org/w/index.php?title=Trope_Workshop:Power_Systems&oldid=1968558"
Categories:
Cookies help us deliver our services. By using our services, you agree to our use of cookies.