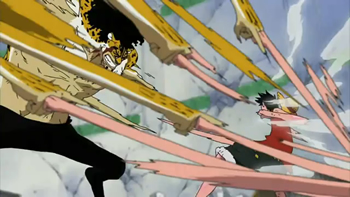 Double the Fisticuffs, double the fun!

Two characters engage in a duel of Rapid-Fire Fisticuffs and struggle for dominance. Very common in shonen action series, and often used in conjunction with Flash Steps.

The Trope Namer is the cult hit video game God Hand, where two characters trying to use the "pummel" attack on each other results in this. It also appears in most of the later titles made by Platinum Games.

Examples of Pummel Duel include:

Retrieved from "https://allthetropes.org/w/index.php?title=Trope_Workshop:Pummel_Duel&oldid=1940823"
Categories:
Cookies help us deliver our services. By using our services, you agree to our use of cookies.