Trope Workshop:You Have Been Warned 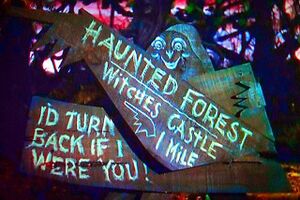 A classic Stock Phrase -- to the point that it became a Predefined Message on The Other Tropes Wiki and here, afterward. It is effectively a punctuation mark upon a description of the terrors or troubles ahead of you, should you continue along the path you have chosen. Usually some helpful and/or knowledgeable individual will list everything the hero (and his friends, if any) will face if they proceed, in either terrifyingly vague terms or excruciating detail. And when the hero decides to go ahead anyway -- well, it's both a way of saying "I Told You So" before anything happens and the verbal equivalent of throwing one's hands up in disgust at the pigheadedness of some people.

Regardless, when you hear someone say this to you, there's only one thing you should do: be very sure you want to continue.

You Have Been Warned.

Examples of You Have Been Warned include:

Well, I did warn him to stay out of it. It’s his fault now.

Are you sure you want to go there? This page—no, this whole site has been known to ruin people's lives, their vocabulary, their spelling, their sense of time, their lives, their perception of reality, their lives, and short-term memory. And their lives. Proceed with caution.