Everything About Fiction You Never Wanted to Know.
(Redirected from Troubling Unchildhood Behavior)
Jump to navigation Jump to search 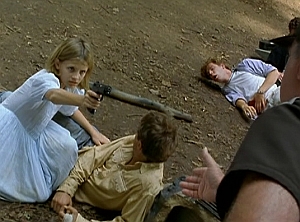 Shooting a man and threatening others with a gun is just the beginning...

"TWELVE? Twelve years old? You lost your virginity when you were twelve?"

Kids should be kids, at least that's how the saying goes. That means worrying about little kid things and doing little kid things, such as playing on the trampoline, watching TV, going fishing, or whatever it is that kids do locally. What we don't expect kids to do is to drink alcohol, smoke, have sex, use drugs, hitchhike, commit violent crimes, or do other things we associate only with teenagers or adults. Yes, many adults are upset when a teenager drinks beer, but it's disturbing when a 10-year-old does it.

In fiction, there's two ways this tends to occur. Sometimes the kid is shown engaging in such behavior as though it's normal for them, and this can be used to show that the child has had a harsh upbringing. Other times, the kid is trying an "adult" behavior for the first time, which may sometimes have disastrous consequences.

The Creepy Child, the Enfant Terrible and the Evil Orphan draw much of their force from this. From the Mouths of Babes is the Sub-Trope where the child only says troubling unchildlike things.

The Fille Fatale is considered this less than is plausible, since sexual precociousness is often a sign of sexual abuse.

Child Soldiers are a particularly tragic and horrific example of this.

For when kids see things (or have things happen to them) that they shouldn't instead of do things they shouldn't, see Harmful to Minors. A Teenage Wasteland runs on this.

Contrast with Wise Beyond Their Years, which is about positive strangely-adult behavior, and Acting Your Intellectual Age, which is neutral.

Note that if the kid is Really Seven Hundred Years Old and just has the physical appearance of a child, it doesn't count. This is for when actual children are the ones engaging in the unchildlike behavior.

Examples of Troubling Unchildlike Behavior include:

As Though It's Normal for Them

Black Jack: Good God, where did you learn that kind of language?

"Also, children are expected to be a certain way, and I like the unexpectedness of how children really are if you watch them. (...) Sometimes children just don't go by the rules, they often have a natural inclination not to, which we as adults have often lost." - Naomi Wallace, screenwriter for Lawn Dogs

Ursa: What is wrong with that child?

Daughter: You can't say that word anymore, it's bad.
Son: Yes I can, boobie.
Daughter: Jesus wouldn't want you to say that word, right?
Son: Yes I would.
Padgett: Great, my kid thinks he's Jesus.

Trying for the First Time

Mailman: Uh... hi. Are your parents home?
The kid takes a puff from the cigarette
Kid: What the fuck do you think?

kids drinking gin on the front lawn
the kids see that man walking down the dirt road
these kids see the sky and they think of him dressed in flames
kids walk behind, slowly stalk, that old man