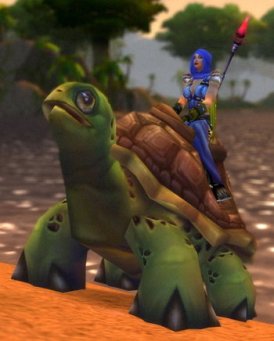 Here we see the latest model, the Tortoise 9000! Strong, durable, and only 5000 gold! Only available in hardtop.

Just like Monkeys and Penguins, people have an odd fascination with turtles. They come off as clumsy, shy and slow, but they also appear wise and spiritualistic at times. They also live for a really long time. If you want a very elderly funny animal, it's usually going to be a tortoise. If they get large enough, they can also qualify as a fantastic transport or living island (or in the case of one series and certain mythologies, the entire world).

Sea turtles in particular are quite popular and are often included as charismatic megafauna for ocean and beach conservation. Giant Tortoises are also quite popular for island conservation, especially the Galapagos Tortoise, which the islands were named after.

They're also notable as the main exceptions to the Reptiles Are Abhorrent trope, being slow, inoffensive, and seen as herbivorous (though only a few are exclusively). A localized exception is the snapping turtle, which isn't generally considered cute, and pretty bad-tempered to boot.

Examples of Turtle Power include:

Retrieved from "https://allthetropes.org/w/index.php?title=Turtle_Power&oldid=1653273"
Categories:
Cookies help us deliver our services. By using our services, you agree to our use of cookies.