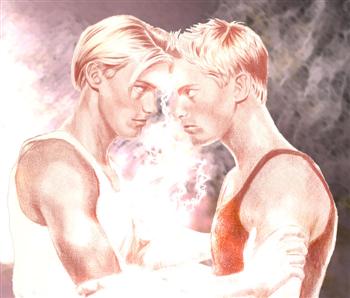 Kim: Ron, why can't my brothers be normal?
Ron: They're relatively normal. For twins, I mean. At least they don't speak their own weirdo language.
Jim: Hikka-bikka-boo?
Tim: Hoo-shaw!

In fiction, at least, it is common for twins - especially identical twins (or brother-sister twins who seem otherwise identical) - to seem to share a Psychic Link, even in series which do not otherwise have any paranormal element. This connection may vary from a vague feeling of when the other twin is in danger, to continuous telepathic communication, to being an outright Hive Mind. They often experience each other's injuries as part of their link, and frequently finish each other's sentences. In a very few cases, the siblings involved are not twins.

Thanks to the Mindlink Mates trope, this level of closeness can lead to other interpretations of their relationship.

Compare with other types of Psychic Links.

Related to, but distinct from, Single-Minded Twins.

Examples of Twin Telepathy include:

Gem: We don't
Gemma: split up
Gem: Ever!