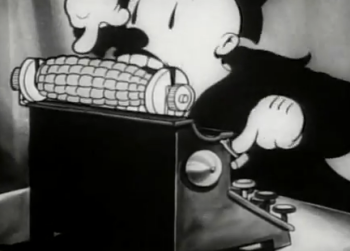 You've probably Seen It a Million Times during The Golden Age of Animation. Here, a character eats a strip starting at one end of the corncob, along its long axis (takka takka takka), reaches the other end (ding!), rotates the corncob a few degrees and returns to the starting end (kachunk!), repeat. This action mimics typing on an old-fashioned mechanical typewriter with moving carriage. They then continue in a different spot.

This trope doesn't seem to be used anymore (and if ever used today, kids would ask what the sounds are).

Compare Buzzsaw Jaw, where the sound effect is (or at least can be) a buzzsaw.

Examples of Typewriter Eating include:

Retrieved from "https://allthetropes.org/w/index.php?title=Typewriter_Eating&oldid=1288056"
Categories:
Cookies help us deliver our services. By using our services, you agree to our use of cookies.