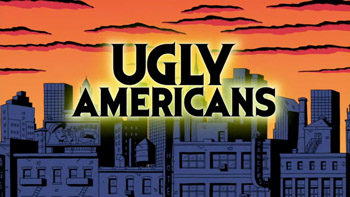 Take New York City, add every horrifying beast, sci-fi freak, and fantasy fairy you or anyone else can think of, shake thoroughly, and you've got Ugly Americans.

The show is set in an Alternate Universe version of New York City where all supernatural creatures exist and have integrated with humanity. Mark Lilly is a new employee at New York's Department of Integration (the "Token Bleeding Heart"), whose job is to help immigrants fit in with American society as well as help monsters fit in human society in general. Unfortunately for Mark, his co-worker Leonard is a drunk wizard, his demonic boss Twayne couldn't care less, and he is at odds with the head of the law enforcement division Frank, who would rather see them all deported. Rounding out the cast is Mark's other succubus boss Callie, who he is having a sorta relationship with, and Mark's lazy zombie roommate Randall.

Has nothing to do with the novel The Ugly American or the cultural stereotype described on the Eagle Land page.

Tropes used in Ugly Americans include:

Twayne: What's the difference between a demonic council and a room full of chickens with their heads cut off? The chickens have far superior mid- to upper-level management skills! HI-YO!

Callie: Oh Mark... so innocent. It just makes me want to *demonically* corrupt your soul and drag it through the bowels of Hell!

Mack: You rub my back, I'll impregnate yours!

Grimes: Again with the talking!

Randall's Dad: I love having a gay zombie son.
Randall: Wait, who's gay!?

Mark: "The end of days" is a plus?
Callie: Well, not for you. Kind of a gray area for demons.

Grimes while wearing a saddle, in his underwear, being ridden by Doug: You should be ashamed of yourself for dreaming this!
Mark: I've been under a lot of stress lately!

Randall: Karen, it's Randall. Did I happen to leave anything over there last night?
Karen: Nope, just a big sweaty pile of me.

Leonard: Yea... I found out that I really need structure.

Twayne: My brother died as he lived: angry, bitter and full of hate. He's gone now, and we must carry on as he would have wanted. Release crow in parenthesis.

Randall: (sees his father in the living room loading a shotgun, dressed in army fatigues) Yeah, that's dad shootin' gun. This is going to SUCK!

Callie: You're lucky I don't turn your dick into a bag of marshmallows right now!
Fishman: I would like to see that, actually.