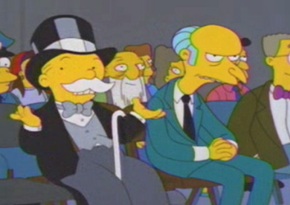 On the left, Uncle Pennybags, on the right his antithesis Mr. Burns.

This is a person, usually male (if not, meet Aunt Pennybags), who, despite being ludicrously wealthy, is actually a fun guy to be around, even if you're dirt-poor. He's often an Affably Evil Corrupt Corporate Executive or an Honest Corporate Executive. He will often be a Good Samaritan, using his massive hoard of money to help people. Often a Self-Made Man; if not, likely to be a grown up Spoiled Sweet.

Not to be confused with Rich Idiot With No Day Job, which is when this is used as a cover for a Secret Identity.

This trope name comes from the mascot of the board game "Monopoly" (first name Milburn), who was renamed "Mr. Monopoly" because people just called him that anyway.

Examples of Uncle Pennybags include:

Retrieved from "https://allthetropes.org/w/index.php?title=Uncle_Pennybags&oldid=1927613"
Categories:
Cookies help us deliver our services. By using our services, you agree to our use of cookies.