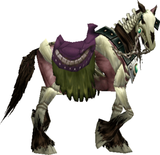 World of Warcraft uses some tropes so much, they continue into the next world.

Generally, there's a standard progression as a trope ages. First, it is born. Once it's become established enough, parodies and subversions start to crop up. Through overuse, it ends up eventually becoming a Discredited Trope, and subversions might be common enough to be straight examples of new tropes, making it a Dead Horse Trope. Or it could just be forgotten completely.

Sometimes, however, tropes just don't want to die, and the progression skips a step. Subversions are common enough to be their own tropes, yet the original trope, even if it's the Oldest One In The Book, is still in active use and isn't even (universally -- opinions vary) seen as cliched or corny. It would be a Dead Horse Trope, except it isn't actually dead. It's Undead.

Some tropes that reach this state eventually ascend into Omnipresent Tropes, ones that are more like the building blocks of a story which would severely limit writers' options if they were taken off the market. The majority remain necessities for genre and narrative reasons for which non-cliched explanations have yet to be able to provide a suitable alternative.

The following 40 pages are in this category, out of 40 total.

Retrieved from "https://allthetropes.org/w/index.php?title=Category:Undead_Horse_Trope&oldid=1823865"
Categories:
Cookies help us deliver our services. By using our services, you agree to our use of cookies.