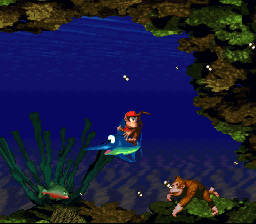 How exactly is he riding that swordfish?

Aquatic levels have been a staple of Nintendo games since Super Mario Bros., but can be seen in other games as well. Typical underwater enemies are sharks, octopuses, electric eels and jellyfish. Expect some Underwater Ruins every now and again for decoration.

Human heroes, such as Mario, often swim fully clothed, without being weighed down or otherwise impeded.

Of course, there are three problems with the underwater level: one, swimming, two, slower movement, and three, drowning. (Or not.) Down the Drain levels are especially prone to special water-based hazards and hindrances, as detailed on that page.

Compare Shark Tunnel. Many of those might enter That One Level territory.

Named for the Oscar-winning song from The Little Mermaid.

Examples of Under the Sea include:

Entire games/works that take place Under the Sea

Retrieved from "https://allthetropes.org/w/index.php?title=Under_the_Sea&oldid=1835491"
Categories:
Cookies help us deliver our services. By using our services, you agree to our use of cookies.