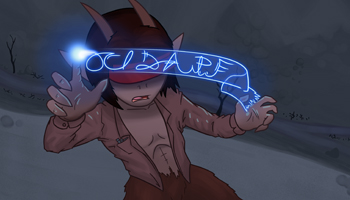 Mephistopheles before putting the hurt down on a recurring villain.

Underling is a defunct web-comic about an ordinary teenager named Lazarus, fed up with society in general, and always in trouble with school. One day, a demon shows up and offers him the ability to rule the world. All he has to do is gather supplies for it, and then he'll have everything he wants! Unfortunately, it doesn't go that easy, and he ends up trapped wandering dimensions. Even worse, he's the spawn of Satan. Hilarity Ensues!

Underling began in 2009 and abruptly stopped in 2013. The original website has disappeared at some point after 2017, but a Wayback Machine archive of the comic can be read here.

Tropes used in Underling include:
Retrieved from "https://allthetropes.org/w/index.php?title=Underling&oldid=1794996"
Categories: