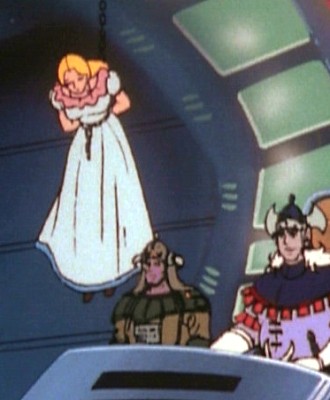 See, I told you. She really helps the feng shui when she's dangling there.

Hanging by the wrists, a common variation, would in Real Life quickly cause permanent damage to the hands and within a few hours cause death by suffocation/"Suspension Trauma", not quite unlike a crucifixion. Many a Tailor-Made Prison has a prior inhabitant hanging by his wrists in skeletal form.

Reasons for doing this include:

Favorite victims seem to be The Hero(es) or the Damsel in Distress (especially a princess and The President's Daughter).

Not to be confused with being suspended from the police force.

Examples of Unwilling Suspension include: