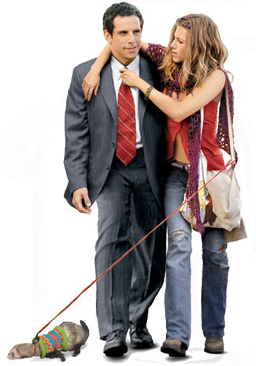 He's an uptight actuary, she has a ferret.

Mr. Stuffy is in a rut: Life is boring because he plays by the rules. Along comes this wild and crazy woman to show him how to live life to its fullest, and she just might learn a few things along the way, too.

Though the most common form of this trope is from male creators who idealize femininity as a saving force, it could be Gender Flipped. Mr. Stuffy could be Ms. Stuffy and the wild angel could be male and help the little wallflower come out of her shell and blossom gloriously into a beautiful rose! Also, compare Well, Excuse Me, Princess! - Loveable Rogue meets Defrosting Ice Queen.

They could be LGBT, as well (e.g. a Deadpan Snarker Seme with a Keet Uke, mentioning no names).

Often seen in 2/3 of a love triangle, especially if the triangle includes two male nerds and their dream girl.

Because Opposites Attract, they'll live Happily Ever After unless Uptight and/or Wild are dying (Nicholas Sparks, we're looking at you.), in which case they'll live what remains of their lives to the fullest.

Compare Savvy Guy, Energetic Girl. Not to be confused with Manic Pixie Dream Girl as the "Wild" part of this trope doesn't need to be Manic, a Pixie, a Dream, or a Girl.

Examples of Uptight Loves Wild include:

Retrieved from "https://allthetropes.org/w/index.php?title=Uptight_Loves_Wild&oldid=1848502"
Categories:
Cookies help us deliver our services. By using our services, you agree to our use of cookies.