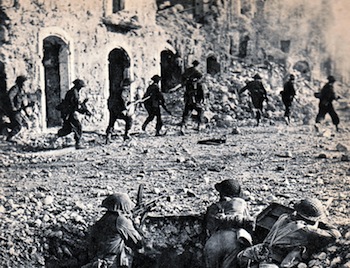 They took one week for fifty metres.

Urban warfare is very different from conventional combat in the open. Clearing a city full of determined defenders is a very difficult task, as the urban environment negates the effectiveness of many of the most powerful weapons of modern militaries (such as tanks and aircraft), leveling the playing field somewhat for not-so-well equipped forces that might oppose them. Armored vehicles have difficulty maneuvering in tight streets and are vulnerable to attack from above, and artillery and air support won't do you any good if the enemy keeps changing positions, not to mention the high potential for collateral damage. Forget the rules of "gentlemanly warfare". It's all guerrilla tactics here. Ambushes, snipers, booby-traps, and shotguns.

This kind of combat is where you can tell a woman to Stay in the Kitchen, and not be sexist at all. You need her to provide covering fire.

As an unfortunate side effect of the dirty, casualty ridden, and momentum killing nature of the fighting, armies are often forced to simply leave the job half done by avoiding it all together (usually due to political implications of such a prolonged, bloody conflict). At other times, they simply flatten as much of the city as possible before/while/instead of fighting over it, thereby neutralizing the "urban" aspect, and usually rendering the place strategically worthless in the process, as well as being, shall we say, problematic to any remaining citizenry.

Seen at least as early as World War II (especially the Battle Of Stalingrad), though there are several Napoleonic war battles (most notably the siege of Zaragoza) that foreshadowed the urban warfare of the 20th century and such battles likely occured even earlier than that. Unfortunately this kind of warfare still takes place in various conflicts around the world, most notably in the Middle East.

Urban warfare is a nightmare in modern times. Even untrained militia can stand against highly trained troops in the confusing twists and turns of a high population center. It is war at its dirtiest, with collateral damage difficult to avoid and a high potential for confusion. Units often find themselves in a confused tangle of friend and foe.

Keep in mind that a battle for a city doesn't necessarily count as urban warfare. In urban warfare, the city streets and buildings themselves are the primary battlefield. Not to be confused with the online game.

Examples of Urban Warfare include: