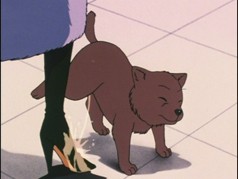 Some writers seem to have an... unusual idea of what makes comedy gold. (Not sure if it would be more troubling if "comedy gold" was an intentional or unintentional pun...) So they resort to potty humor, literally. Urine Trouble is an animal (usually a dog) or human relieving itself on something a character would prefer it not do that on is always the target. Sometimes, it's a baby letting fly with the offending tinkle.

It is usually the unfortunate fate of whatever hapless hero or character disguises himself as a tree or a fire hydrant...in which case you can hardly blame the dog.

Occasionally, it also happens with an amnesiac human who thinks he's a dog, or a dog turned into a human.

Often, but not always, the last step in a Humiliation Conga. Occasionally there will be shots of someone drinking, only for the shot to pull back and realize they're drinking from a fountain with a cherub urinating.

Often a form of Refuge in Vulgarity.

Sub-Trope of Toilet Humour. See also Dogs Are Dumb, I Ate What?, and Dung Fu. When babies do this, it's a Tinkle in the Eye.

Examples of Urine Trouble include: