Everything About Fiction You Never Wanted to Know.
(Redirected from Useful Notes/The Pentagon)
Jump to navigation Jump to search 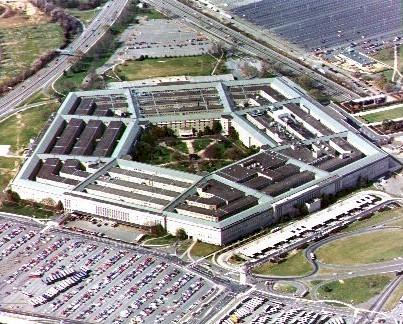 Your tax dollars at work![1]

U.S. Military Headquarters, located in Virginia near Washington, D.C. Nobody ever mentions its street address, but it actually has one: 47 N Rotary Road, Arlington, Virginia, 22211 .

Architecturally, it's a distinctive, pentagonal building, with 5's as a recurring theme: 5 sides, 5 floors, 5 concentric rings. It has 17.5 miles (28.2 km) of corridors, and those five 108° angle corners result in a very confusing layout. The interior is notoriously homogeneous; if you don't read the signs, it's easy to get lost there, since every area looks like every other area. Not to mention that it's easy to lose track of which floor you're on, as some of those corridors are actually ramps, and before you know it, you're up a floor from where you meant to be. It doesn't help that some corridors that should connect to others are off-limits because there's some high-security office in that stretch, forcing detours which offer more opportunity for confusion. Agent Maxwell Smart got lost inside it for several days.

Since the military's top brass does most of its planning there, and since the building is so easy to spot from the air, it was one of the targets of the September 11th, 2001 terrorist attacks. The structure survived in part because it had recently been retrofitted with kevlar. Well before that, however, the exact center of the building was a potential target of Soviet missiles; in fact, until the past decade, the cafe at the center of the structure was informally referred to as the "Ground Zero Cafe".

The building is such a strong symbol of the American military that it's practically synonymous with it, or with the military-industrial complex. When the Defense Department makes an announcement, newscasters will say "The Pentagon announced today...". When the government pays a military contractor (what to the public seems like) an unreasonably large sum for a mundane item, such as a toilet seat or screwdriver, that's Pentagon Spending. When the U.S. military offers cheap assistance to movie producers in order to make a blockbuster movie showing tanks or fighter planes, that's Backed by the Pentagon. Et cetera. In the UK "Horse Guards" (a building, not a group of people) formerly had the same connotations of being synonymous with the military, but this faded when the leadership moved out at the start of the twentieth century.

The distinctive shape and design of the Pentagon and its relationship to other stock mystical symbols as pentagrams lead some to imagine that the building is holding something inside beside a garden. For instance, early Internet culture half-jokingly spoke of the Cosmic Horror Shub-Internet, cause of all network slowdown, lurking beneath the Pentagon.

The building itself has appeared as a setting for a few works, but is not as popular a setting as the U.S. Capitol or The White House farther north.

The Pentagon in fiction:

Your identity has been noted. Greetings from Fort Meade.

Retrieved from "https://allthetropes.org/w/index.php?title=The_Pentagon&oldid=1519353"
Categories:
Cookies help us deliver our services. By using our services, you agree to our use of cookies.