Cute esoteric name that would be better over on TVTropes: No Place for Any Adolescent

Mod note: Please don't use [[Category:No Real Life Examples, Please]] as a bare category. Use the {{noreallife|insert reason here}} template instead, replacing "insert reason here" with the reason why there should be no real life examples on the page. Place this template on the page immediately before the {{examples}} header template. --Robkelk (talk) 14:43, 21 May 2018 (UTC) 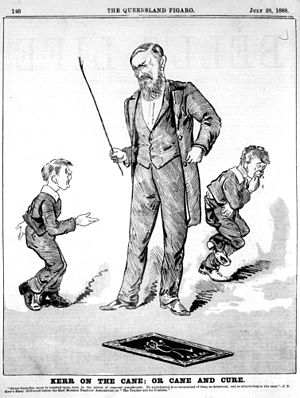 Depending on the region, children and teenagers are often Blessed with Suck since they're under the rules of whoever is in change, usually their parents but anyone who has guardianship of them while proving the basic needs. However, what if it was cranked up, say on a societal measure? What if laws against youth rebellion were put in place, even for yelling at someone in charge?

The official term for this is called "Adultism" and it's just what it wounds like: "Prejudice and accompanying methodical discrimination against juveniles". There are two sub-version of this:

For the purpose of this trope, a societal element is required since Abusive Parents are not always the driving force behind the trope. This will focus on mostly "institutional form", such as laws and/or school systems that would get the attention of a Mama Bear or Papa Wolf. If it's set in a dystopian society with a protective parent willing to do anything for their child, that counts too.

The term "underage" varies in different countries, often referencing the "age of majority." Thus, it depends on whether a country has set that age - for example, 21 is considered an adult in the United States. On the other hand, medical science has placed adulthood at 25 years since that's when the prefrontal cortex, the section of the brain responsible for decision-making, usually finishes developing. Given that information, what would qualify for this trope? For starters, the age limit for this trope's purpose will be 20; this is when the term "teen" no longer appears when age is mentioned.

While an age being mentioned is optional, the work has to apply the existence of this trope. This means, just as long the trope is being used in a work, the age of the characters doesn't have to mention just as long as it's been implied.

Note: This is different from a Childless Dystopia because it's unclear whether there are any children around, hidden or not. Teenage Wasteland, on the other hand, type 4 is an exception because even if the young are in charge, life isn't any easier.

Different Reasons Why Things Are Not Kid Friendly

Due to the nature of this trope, it's advised Real Life Examples aren't to be in included. While there is truth behind this tropes, the trope can be abused should real-life examples be listed. This is due to the controversy behind it when it comes to real life. Documentaries would likely fall under the Real Life clause.

However, if the work is loosely based on a real-life case like a news case or a memoir, then the “No Real Life Examples” clause is excused for the adaption of that work ONLY. Roman à Clef would also be excused from the “No Real Life Examples” rule because, while based on a true story, names of people and location are often altered for privacy reasons, regardless of the outcomes of the parties involved. This page is dedicated to examples in WORKS ONLY.

Compare to Would Hurt a Child and Crapsack World. Often takes the form of a Dystopian Edict.

Retrieved from "https://allthetropes.org/w/index.php?title=User:Beta_Log_86/sandbox&oldid=1668568"
Categories:
Cookies help us deliver our services. By using our services, you agree to our use of cookies.