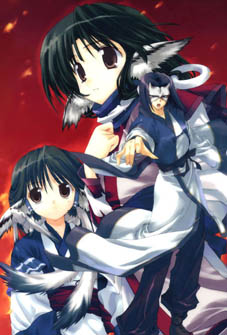 "The Utawarerumono. The One of Whom Legends Are Sung."

In a World in which everyone is a Little Bit Beastly, a strange man wearing an even stranger irremovable mask is found in the forest near a village after a great earthquake. Suffering from serious injuries and having no memory of who he is, he is found and nursed back to health by the local herbalist and her granddaughter. As he recovers his strength, he becomes accustomed to the peaceful farming village and the odd animal traits of its inhabitants, but soon those peaceful days are shattered by violence, and this man, given the name Hakuoro, finds himself inevitably drawn into the center of one conflict after another...

Based on the Visual Novel / Strategy RPG by Leaf, translated by Mirrormoon. Licensed by ADV.

A sequel, Utawarerumono: Itsuwari no Kamen, was released in 2015.

Tropes used in Utawarerumono include: