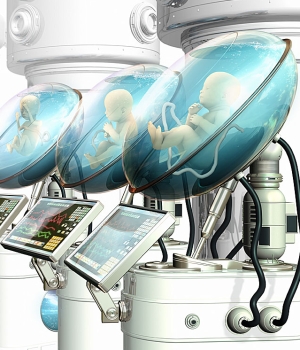 Lucky babies: they've got a womb with a view.

I still remember how it began.
They produced a carbon copy man.
Born in a science lab late one night,
Without a mother or a father, just a test tube and a womb with a view.

A Uterine Replicator is a way of growing a child outside the human body by using technology, magic, or a combination of the two in place of the mother's womb. The reasons for this are many and varied.

This is often staple of Dystopian futures, especially those in which sex is outlawed.

If the child is also genetically engineered see Designer Babies.

Examples of Uterine Replicator include: