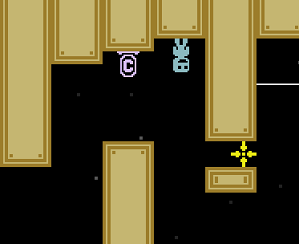 VVVVVV is an indie game created by Terry Cavanagh. It stars a little space explorer named Captain Viridian and his colorful crew. Their ship crashes and is sent into a strange, unfamiliar dimension, and scatters Viridian's crew across the land. He needs to find them and make sure that they're safe! And that's where you come in.

VVVVVV is a 2D platformer with exploration elements and no jump button. Instead, you have a flip button, which reverses your (and only your) gravity. Mastering this is essential to finishing the game. Other than that, there are no other methods of attack, power-ups, abilities, keys, locked doors, or any of that jazz -- the only thing standing between you and sweet victory are the challenges and puzzles put before you (and 7,612 spikes.)

Find the demo here. Buy the full version here or on Steam. It's also available on the Nintendo 3DS eShop, with added 3D effects of course.

Tropes used in VVVVVV include:
Retrieved from "https://allthetropes.org/w/index.php?title=VVVVVV&oldid=1922413"
Categories:
Cookies help us deliver our services. By using our services, you agree to our use of cookies.