Everything About Fiction You Never Wanted to Know.
(Redirected from Venom (Comic Book))
Jump to navigation Jump to search 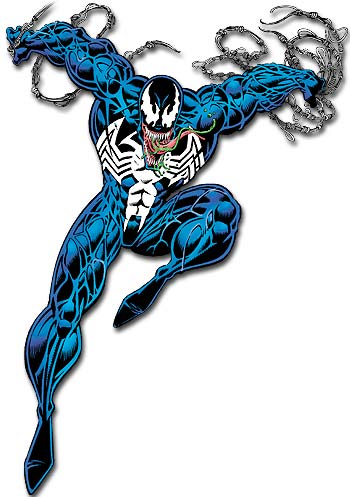 Venom is a Marvel Comics characters, and arguably one of the most famous of Spider-Man's Rogues Gallery, though over time his character and motivation have evolved. Venom is an extremely popular character in the Spider-Man franchise. The Eddie Brock version of the character was playable in Separation Anxiety, and later, the first and second Marvel vs. Capcom, making the leap from comic to video game. Mac Gargan was playable as Venom in the second Marvel Ultimate Alliance game, with Eddie Brock's appearance as an alternate costume.

Venom is an alien symbiote that was used to build a new suit for Spider-Man, inspired design-wise by the second Spider Woman (Julia Carpenter) during their team-up in Secret Wars. The costume change was initially unpopular with fans (although the black costume would later be brought back as fans began to like it a bit more) so it quickly went through a Retcon as an alien symbiote that wanted to bond with Peter Parker. Horrified, Spidey managed to repel the symbiote by taking advantage of its weakness to sonic noises via church bells. Some writers and editors did not like Peter's motivation at the time so there was a second Retcon that the suit was more powerful than his ordinary suit, but was slowly driving him insane with rage. Wanting to create a new villain for his rogues gallery, the writers decided the creature survived to bond to a series of new hosts:

Probably the most famous Venom. Eddie's mother died during childbirth, and as a result his father became cold and distant, instilling a thirst in Eddie to impress him. As an adult, he becomes a journalist for the Daily Globe, and enjoys great success until he mistakenly "outs" a compulsive confessor, Emil Gregg, as the serial killer Sin-Eater. Spider-Man debunks Brock's article by capturing the real killer, and Brock is fired from the Daily Globe, divorced by his wife, and disowned by his father. Reputation destroyed, he is only able to find employment as a two-bit writer for a disreputable tabloid. Blaming Spider-Man for his troubles, he begins to work out obsessively in an attempt to assuage his rage.

Eventually, Eddie cannot take it anymore. Raised a devout Catholic, he goes to his local church to pray for forgiveness for the suicide he is contemplating - unaware that Spider-Man has used the bells in the selfsame church to drive away the Venom symbiote. The symbiote, lying in wait in the rafters for an appropriate host, bonds to Brock. In the process, Brock learns Spider-Man's true identity, and Brock's overwhelming hatred for Spider-Man taints the symbiote.

As Venom, he becomes one of Spider-Man's most formidable foes: stronger, faster, and immune to his Spider Sense. He wages a campaign of torment against Peter Parker, invading his private life and threatening his loved ones. He is not altogether evil, though; he exhibits moments of compassion, like rescuing a little girl during a pitched battle with Spider-Man. He even ends up in a few Enemy Mine situations with him - generally to combat the symbiote's "child", Carnage, who has bonded with Serial Killer Cletus Kasady. Over time, Venom slowly develops into a Type V Anti-Hero.

Eventually, it is revealed that Eddie has had cancer for some time. The symbiote chose Brock as a host, not only for his mutual hatred of Spider-Man, but also for the fact that it could "feed" from the adrenaline his cancerous body produces, keeping the disease in remission, but no longer wishes to remain bonded to a dying host. Undergoing a Heel Face Turn, Brock, disgusted by the symbiote's growing bloodlust, decides to sell it to the highest bidder and donate the proceeds to charity, knowing it will mean the death of him. Unfortunately, the highest bidder turns out to be crime boss Don Fortunato, who gives the symbiote to his son Angelo. Proving an "unworthy" host in the symbiote's eyes, it abandons Angelo mid-jump, and the man falls to his death. Feeling responsible for the death, Brock spirals into depression and attempts suicide numerous times, but is ultimately freed from his obsession with Venom and his cancer, courtesy of the healing abilities of Martin Li.

The remains of the symbiote in his bloodstream, somehow altered by Li's ministrations, bond with his white blood cells to transform Brock into the hero "Anti-Venom". In this guise, he battles the third Venom, Mac Gargan, several times. Ultimately, though, he is forced to depower during the Spider Island storyline, so the Anti-Venom suit can be used to make an antidote to cure the infected millions of New York. Eddie sets out to slay the remaining symbiotes, starting with Hybrid and Scream, but was captured by the Crime Master, who bonded him to the Toxin Symbiote.

The "second" Venom: mostly ignored by both readers and canon, he was the son of a Mob Boss who purchased the Venom symbiote. After an unsuccessful battle with Spider-Man, the symbiote deemed him an unworthy host and abandons him in mid-leap, causing Fortunato to fall to his death.

Also known as Scorpion. The symbiote directly approaches Gargan, already an established Super Villain, offering him new abilities in exchange for murdering Spider-Man. During his tenure as Venom, he is a part of both Norman Osborn's Sinister Twelve, government-sponsored vigilantes The Thunderbolts, and the Dark Avengers, where he impersonates Spider-Man. His stint is characterized by an increasing dependence on the suit and its powers, despite the limitations that result - almost like a drug addict. He becomes increasingly erratic and unstable, driven by the symbiote's bloodlust to commit cannibalism, and is eventually forcefully separated from the symbiote and fitted with a new Scorpion suit.

The symbiote eventually falls into the hand of the government, who begin researching ways to weaponize it for the American army.

Peter Parker's former Jerk Jock of a friend. Flash enlists in the army during the Iraq War and is grievously wounded in action, losing the use of both legs while saving his comrades. Lauded as a hero for his sacrifice, he is given an offer by the military: he can "rent" the Venom symbiote for short periods (never long enough for the symbiote to establish control) for important missions, regaining the use of his legs in the process. Thompson agrees and subsequently becomes the new Venom, marking the character's transition to fully-fledged hero. In addition to the usual plethora of abilities, Thompson is a trained marksman, and uses a variety of firearms in his capacity as a government-sponsored Super Soldier. However, should Flash become angry while wearing the symbiote, it will assume control of his body.

After the events of Spider-Island, Flash went AWOL to retain the Symbiote and hopefully protect his friends and family. This led Captain America to send Red Hulk after him. Recently, Flash teamed up with Rulk, X-23 and the newest Ghost Rider against Blackheart while all were in Las Vegas and saved the world from Hell on Earth. With those actions in mind, Captain America placed Flash, under the belief that Flash had the symbiote under control, within the Secret Avengers.

Tropes common to all versions of Venom: