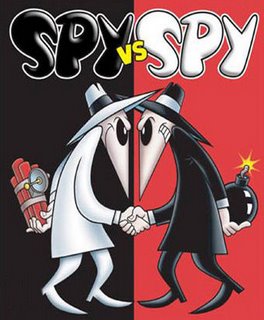 Now that's what I call Black and White Morality. Or not.

When you are creating a work in which two clearly distinct entities are in conflict or compete against each other, a common way to name your work is to identify the two entities and insert a word or symbol indicating the conflict.

These most frequently take the form of X Versus Y (or X vs Y). Titles of this form were particularly common for older B Movies, and is now something of a Dead Horse Trope within that field, though often used straight in homages. They continue to be frequently used in names of episodes of Western Animations and Live-Action TV shows.

Another variant, replacing "Versus" with a simple X, as in Alice X Bob, is particularly common in Video Games developed in Japan. Where it is a crossover, it may take the form of X Meets Y, although these are relatively rare.

May involve an Ultimate Showdown of Ultimate Destiny or Cool Versus Awesome. Where both entities are antagonists, this may be an Antagonist Title. Similar to The Noun and the Noun and Name and Name. Often mirrors Character Name and the Noun Phrase.

Examples of Versus Title include:

Retrieved from "https://allthetropes.org/w/index.php?title=Versus_Title&oldid=1847142"
Categories:
Cookies help us deliver our services. By using our services, you agree to our use of cookies.