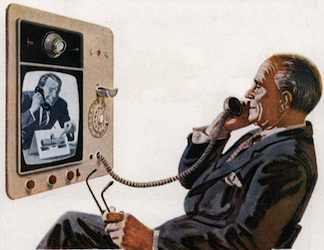 It's the wave of the future, but it's a shame we couldn't find ways to improve those annoying rotary dials.

An extremely common trope found in any stories told in future or high-tech settings (and, to a lesser extent, spy and espionage stories), a Video Phone (Sometimes also referred to as a VidPhone) is a telecommunications device that functions exactly like a telephone but distinctly comes with a video screen which allows for the individuals on both ends of the call (and the audience) to see each other.

In some depictions, such a device may make use of an ordinary telephone receiver in order to speak to and hear the person on the other end, but most often characters usually just talk to the screen.

Like Flying Cars, Ray Guns, and, of course, Jet Packs, this is one of the most frequently observed tropes in depictions of The Future and originally popularized in the Raygun Gothic era of Science Fiction, but where most of these ubiquitous genre tropes remain absent from our reality, the Video Phone has been publicly available in one form or another since 1936; the German government ran public videophone booths prior to WWII, though these early trial services were disrupted by the war. AT&T opened the first public videophone booth in the US in 1964.

Despite this constant attention and the relative simplicity of the technology involved (Alexander Graham Bell himself talked about the possibility), lack of consumer interest kept it from going anywhere; the honest truth was that it seemed that despite all the sci-fi attention it received, the public didn't really want videophones, at least not at any significant price. They only became broadly successful in the modern era once they could be cheaply integrated into existing computer technology, and even then, many would argue they remain more of a novelty outside of the porn business and outside of a few common apps such as Skype (Microsoft) and Facetime (Apple, for Apple-manufactured devices only).

Although the technology is relatively simple, the fact is that until high-speed Internet and cheap microcomputers became ubiquitous, it was out of the reach of normal usage because of a lack of bandwidth. Plain old telephone service (POTS) simply can not carry video of any quality without massive compression and even then the entire system would need to be upgraded by a massive amount. AT&T's 1964 offering required special lines (one each for audio, inbound video, outbound video - so three lines) on a crossbar exchange which had been upgraded to handle the additional bandwidth. It would simply have cost a huge amount of money. Unless the party on the other end of the connection also had a videophone, and no one did, it offered no tangible benefit. The old joke that "a village that can't support one litigation lawyer can always support two" is just as true of telephony, in what is known as a "network effect".

Only with modern technology has the public switched telephone network evolved to offer such services like ISDN, DSL and fibre; once broadband Internet was already in place, webcam support becomes merely another Internet application. A new laptop often already includes webcam hardware and wi-fi to connect to the fast broadband which now exists almost everywhere. What looked futuristic when portrayed in 2001: A Space Odyssey in 1971 was merely a Product Placement for a product which AT&T already had in some communities, but which was finding few takers due to cost.

Note: Given this trope's increased existence in Real Life, please refrain from listing work examples that use existing technologies in Present Day settings. If a work example of a Video Phone is based on an existing consumer product, please only list the product as a Real Life example, if it's not listed there already.

Examples of Video Phone include:

Retrieved from "https://allthetropes.org/w/index.php?title=Video_Phone&oldid=1903595"
Categories:
Cookies help us deliver our services. By using our services, you agree to our use of cookies.