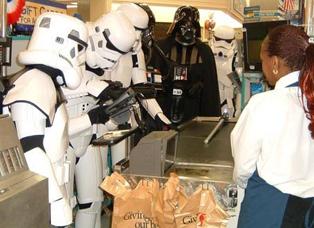 "I find your lack of asthma inhalers disturbing."

The heroes are on the ropes, the Evil Overlord has been awakened from his ancient slumber and his kung fu is stronger than theirs. While the heroes are licking their wounds, they wonder what unspeakable evil he's plotting, and the camera makes a cut to...(Dramatic Pause!)...the villain trying out some jeans and t-shirts at Hot Topic.

Similar to a Gilligan Cut with an Affably Evil or Punch Clock villain as the Gilligan, Villains Out Shopping is a humorous cut to the villain doing or enjoying a perfectly mundane hobby unrelated to torture or being evil in general. Occasionally, the hero will join in and go Go-Karting with Bowser, and they generally won't attack villains during such activities, if only due to the market being a Truce Zone.

A similar situation is one where the hero has mistakenly concluded that one of the usual villains has done a crime, when really, it was a different one. The hero will knock down the villain's door to discover...them trying on leather pants. Like we said, a crime. (Unless it's David Bowie wearing them.)

Generally used to humanize the villain. Don't expect the Complete Monster to do this, other than perhaps to try to subvert it. For the heroic version, see Heroes Gone Fishing. A fanfic about the shopping trip is a Curtain Fic.

Not Me This Time may occur if the heroes attack the villain because they didn't anticipate a shopping trip.

Kingpin in His Gym and Mob Boss Suit Fitting are subversions, as the villains may initially seem to be enjoying some downtime but are actually training for/planning further villainy.

Examples of Villains Out Shopping include: