Everything About Fiction You Never Wanted to Know.
Jump to navigation Jump to search
/wiki/Vince Russocreator 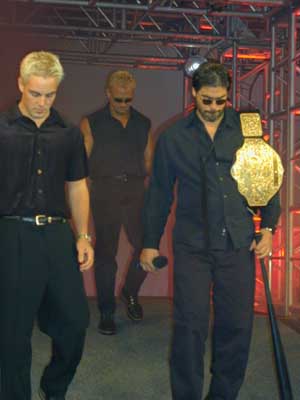 "I'm going to tell you something right now that you will absolutely not agree with, but I've been a wrestling fan my whole life and I will live and die by this. It's hard enough, believe me, I write this shit, it is hard enough to get somebody over. You will never ever, ever, ever, ever see the Japanese wrestlers or the Mexican wrestlers over in American mainstream wrestling. I'm an American. If I'm watching wrestling here in America, I don't give a shit about a Japanese guy. I don't give a shit about a Mexican guy. I'm from America, and that's what I want to see."
—Vince Russo, WCW booker (1999).

Vince Russo is a head writer for the WWF, WCW, and TNA, and is one of the most controversial figures in Professional Wrestling history (and one of the few non-wrestlers in the business who generates such controversy).

Russo's biggest success was when he (along with Vince McMahon) was able to turn the WWF around during the Monday Night Wars with its "Attitude" branding, resulting in the company's biggest period of success since the Hulk Hogan era, and a resurgence in popularity for the industry as a whole.

He would try to emulate this success when he, along with writing partner Ed Ferrara, jumped ship to WCW in 1999. However, without McMahon's editing and input, his storylines were...variable in their quality. And that's putting it kindly. Not only that, he failed to realize that the WCW audience had different expectations than the WWF audience: instead of catering to them, he attempted to transform WCW into a poor man's WWF, which alienated the existing fanbase and put off any new viewers (who just switched over to WWF). Although Time Warner promoting Jamie Kellner, who made no bones that he hated wrestling, in charge of their programing was probably the mostly likely factor in WCW's death, Russo's booking during 1999 and 2000 didn't help.

Having been a Professional Wrestling fan for so long that he proclaims to have "seen it all", Vince Russo's booking ethos is to try to shock and surprise the fans with something new. Unfortunately this usually amounts to something that doesn't make sense rather than something that is original, or something that the fans want to see. There is a reason why he is the Trope Namer for Shocking Swerve. Another issue is that he constantly tries to fool the Smark fans: the problem here is that the Smarks- being Smarks- don't buy it, and regular fans are just confused by things like wrestlers "breaking character" or references to backstage incidents that only hardcore fans would know.

His infamy is such that when it was announced that he had been re-hired by the WWE in 2002, the rest of the writing staff threatened a walk-out. His tenure at WWE ended a few days later, after a "big idea" he proposed bombed horribly (rumor has it that it would have been a restart of WWE's own failed WCW "Invasion" angle led by Eric Bischoff; as a point of interest, Bischoff was hired by the WWE a month after Russo's dismissal) and he was demoted to an advisory role, one that he quit soon after.

After this, Russo came on board to TNA, and has been a regular booker (for the most part) since the company started business. Russo was a member of TNA's booking committee. His reputation is such that, in response to a series of (very real) backstage incidents between Jeff Jarrett and Kurt Angle over the latter's ex-wife, many observers first believed that it was all an angle devised by Russo and refused to believe it was real. In 2012, Dixie Carter announced that TNA and Russo had mutually parted ways and he was replaced by Bruce "Brother Love" Pritchard. However, it was already formally announced that Russo had left TNA in October 2011.

Ultimately, Russo's "creative" output will give an observer the idea that his writing is done from a play book (or trope book, if you prefer) the size of a religious pamphlet, and that he has relied on this limited source of potential ideas for the majority of his career within professional wrestling, rehashing the same concepts and ideas in multiple companies with multiple (and sometimes, the very same) characters.