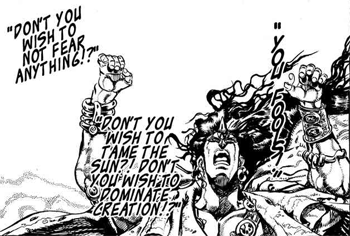 This coming after killing almost every living thing on Earth in order to fuel his project.

Villains commit crimes for many reasons, usually petty and short sighted. Occasionally though, there are villains with a clear goal behind commiting their atrocities; some great, some terrible, all terrifyingly well executed. This is the Visionary Villain, he or she sees "the big picture", and has a clear head about what they want to accomplish and how to do it without juggling a Villain Ball.

As an Antagonist, their morality can be anywhere on the scale from Well-Intentioned Extremist to Complete Monster; all that changes is the motivation for wanting to achieve their goal. The common thread is that they have seen the state of the world and want to change it, whether into something better or worse varies. A sympathetic villain may want to kill the people responsible for his Dark and Troubled Past and Freudian Excuse so it never happens to someone else, perhaps becoming an avenging angel of sorts. A laughing monster of a Card-Carrying Villain on the other hand, may want to Take Over the World (or end it) because she sees society as nothing more than a thin facade, and peeling it away will expose the true face of humanity.

As with most villains, their watchword is Ambition. No matter how noble their intention, fundamentally they want to change things and think they know best. If they assemble a team or organization around themselves, expect them to give at least one New Era Speech to a less ambitious, clear sighted, or bright minion. Because of the great variety of Visionary Villains, their style of leadership is often directly related to their goal. A charismatic Dark Messiah may gather followers and teach them Utopia Justifies the Means, an Evil Overlord will field armies to realize his vision of a peaceful unified world, and a Mad Scientist will create Tree People not for pure science, but to replace a planet-killing humanity. The two powers all Visionary Villains share are a big brain and silver tongue.

Contrast Cut Lex Luthor a Check. The opposite of Punch Clock Villain. Frequently sneer at minor or petty villains who yell "Screw the Rules, I Have Supernatural Powers!"

Examples of Visionary Villain include:

Retrieved from "https://allthetropes.org/w/index.php?title=Visionary_Villain&oldid=1687293"
Categories:
Cookies help us deliver our services. By using our services, you agree to our use of cookies.