Everything About Fiction You Never Wanted to Know.
(Redirected from Viva Pinata)
Jump to navigation Jump to search 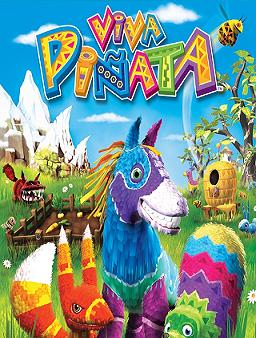 Sure, it's all smiles and cuteness now. But then comes the cannibalism and inbreeding...

Viva Piñata is a video game series developed by Rare. It is primarily a Mons farm Simulation Game. The player takes on the role of a Piñata Gardener on Piñata Island, a world of animated Piñatas all styled after various animals. The player is presented a ruined patch of dirt and tasked with terraforming and expanding it into a Piñata Garden, which is part zoo and part ranch. The player begins by attracting Whirlms, simple worm piñatas. You breed them, sell some offspring and use others to feed to wild Piñatas to attract new types to your garden, or send them off to parties to make money. This gives you cash to improve your garden further, which unlocks more options and attracts more pinatas, following a food chain. It's a sandbox game, but the ultimate goal is to attract all 60 (100 in later games) breeds of Piñata to your garden and become a Master Romancer (i.e., breed them like crazy), for every single species.

The series was a Sleeper Hit on the Xbox 360. Microsoft wanted the game to be its answer to Pokémon, but it didn't work out. Why? Well, the game looked like a children's game but actually comprised challenging Sim management tasks that kids just couldn't handle. At times, the games dip into Nintendo Hard or Guide Dang It, with the in-game Ninja Butterfly actually lying to the player at points to mislead them. The original game was also launched with a tie-in animated series (featuring Talking Animal Piñatas throwing parties) that wasn't even slightly representative of how the games actually play (although occasionally a reference to a game mechanic is made, and is even the main plot point of a few episodes). The game was also much more morbid than it seemed at first appearance, with a food chain of Piñatas killing each other and feasting on their candy innards being required to progress in the game.

Tropes used in Viva Piñata include:
Retrieved from "https://allthetropes.org/w/index.php?title=Viva_Piñata&oldid=1723581"
Categories: